How Restless Legs Syndrome Impacts the Quality of Your Sleep

How Restless Legs Syndrome Impacts the Quality of Your Sleep 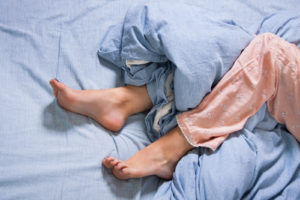 Restless Legs Syndrome drastically impacts your sleep as well as the quality of your life. Many people with RLS attribute their symptoms to other conditions, so understanding this syndrome can help you identify if your sleep is being impacted by RLS.

What is Restless Legs Syndrome (RLS)?

Restless Legs Syndrome is also known as Willis-Ekbom Disease, and is a neurological sensorimotor disorder that causes you to feel a constant urge to move your legs whenever you are resting. This urge is also often paired with uncomfortable sensations in your legs.

The symptoms of RLS can vary among those suffering from the condition. Often times people think their symptoms are indicative of other neurological, muscular, or orthopedic issues. According to the National Sleep Foundation, RLS symptoms can include:

While the exact causes of RLS remain unknown, researchers have been able to classify this syndrome into two types: Primary RLS and Secondary RLS.

Primary RLS
Primary RLS is the most common form of this disorder, and is most likely genetic.

Secondary RLS
Secondary RLS is believed to be associated to certain medications, or as a result of another medical condition such as:
• Varicose veins
• Pregnancy
• Kidney failure
• Anemia
• Stress
• Diet

How Many People Are Affected by This Condition?

According to the National Sleep Foundation, 10 percent of Americans suffer from Restless Legs Syndrome. Two percent of children are impacted by this condition as well, particularly if they also have ADHD.

However, many more people may be affected but attribute the symptoms to insomnia or depression. In fact, according to the Restless Legs Syndrome Foundation, 40% of people with RLS describe symptoms that might be diagnosed as depression without the consideration of a sleep disorder.

According to the American Sleep Association, people suffering from RLS experience the most severe symptoms of this condition at night when they try to relax and go to sleep. The irresistible desire to move your legs while trying to sleep, along with the uncomfortable pulling, tugging, and itching sensations in your legs or other parts of the body significantly impact the amount and quality of sleep you are able to get each night.

RLS is a serious condition, but fortunately, it is also treatable. For many people, making changes in their diet, increasing iron intake through supplements, and easing symptoms with an exercise program can help alleviate the problems with sleeping at night.

However, if your symptoms persist or get worse, you should consult a doctor and sleep expert in order to properly diagnose your RLS condition, and learn about treatment options that will work for you. Because RLS can be linked to underlying health issues, your doctor will want to do a thorough examination, medical history, and bloodwork to help identify any issues that might be contributing to your condition, and help you make a plan for getting better, and sleeping peacefully again.