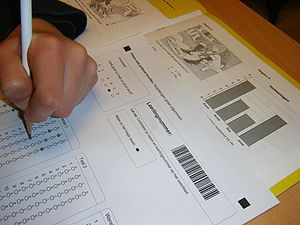 Do you know the connection between students’ test scores and the amount of sleep they get? (Photo credit: Wikipedia)

Everyone knows that you function better when you get a good night’s sleep.  It doesn’t matter how old you are or what you do, getting the sleep you need boosts your productivity, improves your mood, and enhances your performance.  This is because of what happens when we sleep; our body and brain perform important functions that support our ability to learn, our long term memory, and even our immune system.

Given what we know about sleep, it shouldn’t be surprising that researchers have found that there is a link between adequate sleep duration and good grades.  When students don’t get enough sleep, their performance suffers and their grades drop.  If you expand those findings to include other areas of academic performance and measurement, it is reasonable to assume that not getting enough sleep would have a similar impact on a student’s performance during standardized testing.

However, a new study conducted at Brigham Young University and published in The Eastern Economics Journal has shown that this is a bad assumption.  Most sleep experts agree that teenagers need 9.25 hours of sleep every night.  This is based on a study conducted at Stanford University that monitored how much sleep teens routinely got when they were allowed to dictate how much they slept between 10PM and 8AM.   This is the sleep duration linked to getting good grades and improving academic performance.

This study focused on the link between sleep duration and standardized test performance.  The research team found that sleeping the recommended amount did not produce optimal test scores, but that’s not all.  They also found that the recommended 9.25 hours of sleep per night may not be the right amount for all teens and that the optimal amount of sleep may actually be different at different ages within the teenage years.  According to the results of this study, the 9.25 hours of sleep was only optimal for participants under age 10.  By age 16, 7 to 7.5 hours sleep seemed to be the optimal amount, especially in relation to standardized test scores.  Additionally, the closer a participant was to that optimal sleep duration target, the better they did on the test.   The team found that getting too much sleep was actually as detrimental to test scores as not getting enough.

In order to ensure your teen gets the scores they need on their standardized testing, they need to make sleep a priority.  Practicing good sleep hygiene and following a solid getting-ready-for-bed routine can help them to stay on track and boost both their academic performance and their standardized test scores.  In preparation for test day, make sure they are getting a good night sleep every night and don’t go into test day with a large sleep debt.  Plan ahead so that your teenager can get a full night’s sleep the night before the test.  On test day, get your teen up early enough to allow them time to properly wake up before they have to start the test.