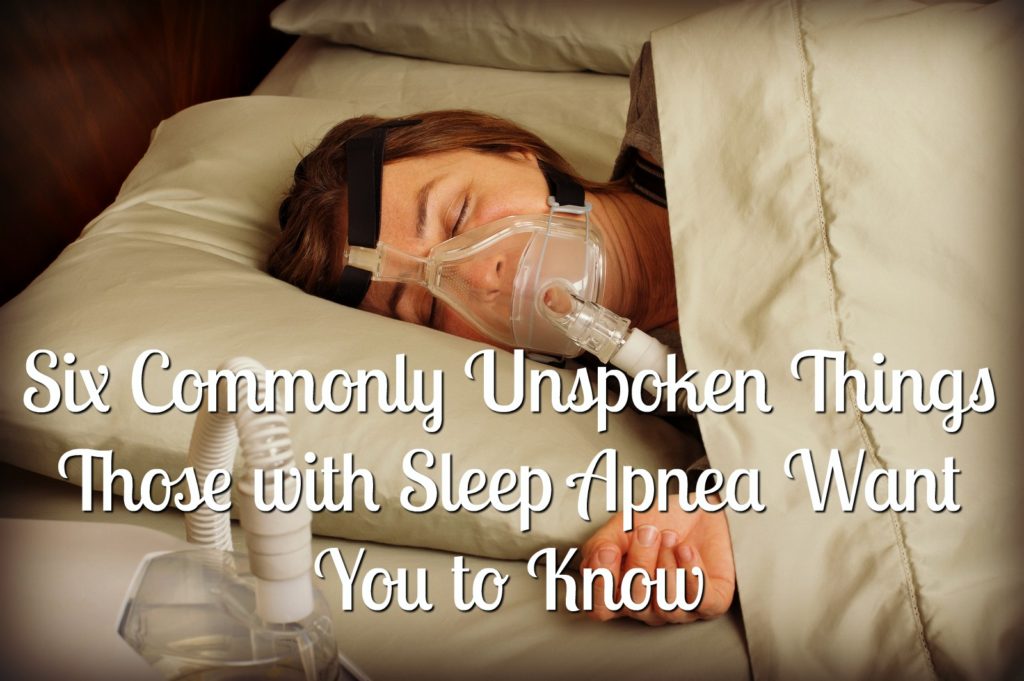 Here are six commonly unspoken tings those with sleep apnea want you to know:

Women have sleep apnea too.

Though the disease is more common among men, women do suffer from it as well. According to the World Congress on Sleep Medicine, around four percent of men and two percent of women in the U.S. have sleep apnea. In fact, sleep apnea can run in families, regardless of gender.

Sleep apnea can be hereditary.

Facial features that children inherit from their family members- such as large tonsils, a large overbite, and a recessed chin- put them at a higher risk of developing sleep apnea.  According to the American Sleep Apnea Association, up to four percent of U.S. children have sleep apnea, some of which are as young as two years old.

Snoring is not always harmless.

Some people like to joke and tease people who snore loudly, but it isn’t always a laughing matter. If someone complains or teases you about your loud snoring it is not something you should take lightly. Loud, chronic snoring accompanied by choking and gasping for air are the most common symptoms of sleep apnea. Though you sleep through most of it, it does affect your overall sleep quality- which leaves people feeling unrested the next day.

Even people within a healthy weight range can have sleep apnea.

Though overweight people are at a higher risk of developing sleep apnea, it can affect people of all sizes.

Treatment is not the same for everyone.

The most common treatment for sleep apnea is the continuous positive airway pressure (CPAP) machine. The CPAP machine consists of a mask that goes over the patients nose and mouth which is connected to a machine that provides continuous airway pressure and keeps the nasal passages open. CPAP machines don’t work for everyone. According to the Mayo Clinic, other treatments include:

Sleep apnea should not be ignored or taken lightly.

Sufferers also run the risk of being fatigued throughout the day due to sleep deprivation, and they also risk keeping their partner awake and sleep deprived as well.

It is very common that bed partners or family members are the first to notice your sleep apnea. If they say that the snoring is loud and chronic, and sometimes accompanied by choking or gasping while sleeping, you may benefit from a sleep study to determine whether or not you do in fact have sleep apnea. Once properly diagnosed, you and your doctor can begin working on a finding a treatment plan that works for you.