The Top 7 Dangers of Sleep Deprivation

Sleep is essential for a waking life filled with energy, and good health. This is a fact proven by science and one you have probably noticed in your own life; especially if you have ever experienced the effects of sleep deprivation. 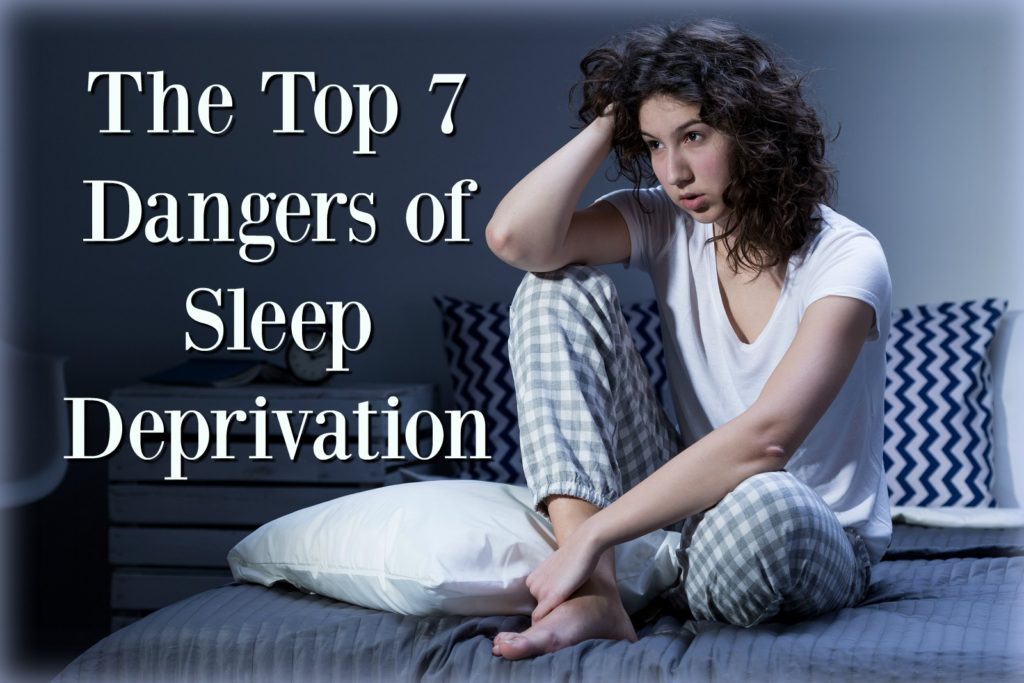 These Are the Top Seven Dangers of Sleep Deprivation:

Sleep plays a vital role in how you learn and think. Lack of sleep impairs your attention span, alertness, reasoning, concentration, and ability to problem solve. This makes it difficult to learn effectively. Also, when you sleep at night, you go through various sleep cycles that play a role in strengthening your memories. When you don’t get enough sleep, you are less likely to remember what you experienced or learned that day.

Were you aware that sleep deprivation played a role in some of the biggest disasters in the last 40 or so years? To name a few; the 1979 nuclear accident at Three Mile Island, the Exxon Valdez oil spill, and the nuclear meltdown at Chernobyl in 1986. However, sleep deprivation is its most dangerous to us as a public every day out on the road. Driving drowsy can slow your reaction time as much as drunk or impaired driving would. According to the National Highway Traffic Safety Administration (NHTSA), sleep deprivation, or drowsy driving is a cause in around 100,000 auto crashes and 1,500 crash-related deaths yearly in the U.S. Statistics show that the problem is greatest among people under 25 years old. Sleep deprivation or poor-quality sleep is also known to lead to accidents and/or injuries in the workplace.

It is estimated that around 90 percent of people who suffer from insomnia -a sleep disorder characterized by difficulties falling and staying asleep-  also suffer from other medical conditions. According to WebMD, chronic sleep deprivation could potentially lead to:

Getting plenty of sleep helps keep your memory sharp. According to WebMD, in 2009, American and French researchers determined that brain events called “sharp wave ripples” are responsible for consolidating memory. The ripples also transfer learned information from the hippocampus to the neocortex of the brain, where long-term memories are stored. Sharp wave ripples occur mostly during the deepest levels of sleep.

It has been proven that a lack of sleep is related to an increase in hunger and appetite, and possibly even obesity. WebMD sites that a 2004 study claimed that people who sleep less than six hours at night were nearly 30 percent more likely to become obese than those who slept seven to nine hours. Sleep loss is also linked to cravings for foods that are high-fat and high-carbohydrate. Studies are being done to help determine whether or not adequate sleep should be a part of weight loss programs.

According WebMD, in the “Whitehall II Study,” British researchers looked at how sleep patterns affected the mortality of more than 10,000 British civil servants over two decades. The results, published in 2007, showed that those who had cut their sleep from seven to five hours or fewer a night nearly doubled their risk of death from all causes. In particular, lack of sleep doubled the risk of death from cardiovascular disease.

If you are suffering from sleep deprivation, it is important to note that it is commonly due to unrecognized sleep disorders. If after a typical night’s sleep, you don’t feel restored and refreshed and are sleepy during the day, you may benefit from a sleep study.  A sleep study is a stepping stone to helping you get the sleep you need to better maintain your health and well-being.