Sleep in America Poll Results – Exercise is Good for Sleep! 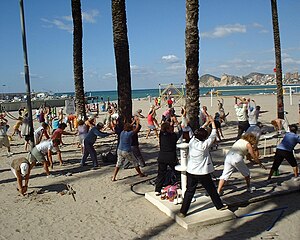 Did you know exercising is good for sleep? (Photo credit: Wikipedia)

The National Sleep Foundation’s 2013 Sleep in America poll results are in and one of the best things you can do to ensure you get a good night’s sleep is exercise.  According to the poll results, exercise doesn’t change how much sleep you need at night or your sleep pattern but it does change the quality of the sleep you get.  The proportion of people who exercise, even those who categorize their exercise level as light, and who also report getting a good night sleep overall is 20% higher than those who don’t exercise at all.

On average, poll respondents indicate that they need between 7 hours 10 minutes and 7 hours 28 minutes of sleep per night in order to feel that their sleep needs have been met.  This average is consistent across all respondents regardless of how much or how little exercise they reported.  However, those who report exercising at any level are more likely than those who don’t exercise to state that their sleep needs are generally being met.   Additionally, those who exercise are nearly twice as likely to get more sleep then needed on workdays than their non-exercising peers.

According to the poll results, vigorous exercise also decreases the incidence of sleep problems like waking up during the night, waking up un-refreshed, or having difficulty falling asleep.   Vigorous exercisers also reported falling asleep almost 10 minutes faster on average than their non-exercising peers.   Exercise also appears to help decrease the incidence of drowsy driving, only 4-6% of those who reported exercising also reported having trouble staying awake while driving during the two weeks before the poll as compared to 14% of non-exercisers.

While the poll results make it clear that exercise improves several factors related to sleep, it also shows that not getting exercise has real consequences in terms of you sleep and your overall health.  Only 3-4% of those who get any exercise at all report that their sleep quality is bad compared to 14% of non-exercisers.  From an overall health perspective, 12% of non-exercisers indicate that they are in poor health compared to 1-2% of exercisers.  The results make it clear that exercise plays a significant role in preserving sleep quality and contributes to a healthy lifestyle.