5 Eye Conditions and Their Connection to Sleep Apnea

Is it possible to diagnose obstructive sleep apnea (OSA) by checking someone’s eyes? Yes, according to the American Academy of Ophthalmology (AAO),  there are ocular signs that an Ophthalmologist can see which could point to a patient having OSA. 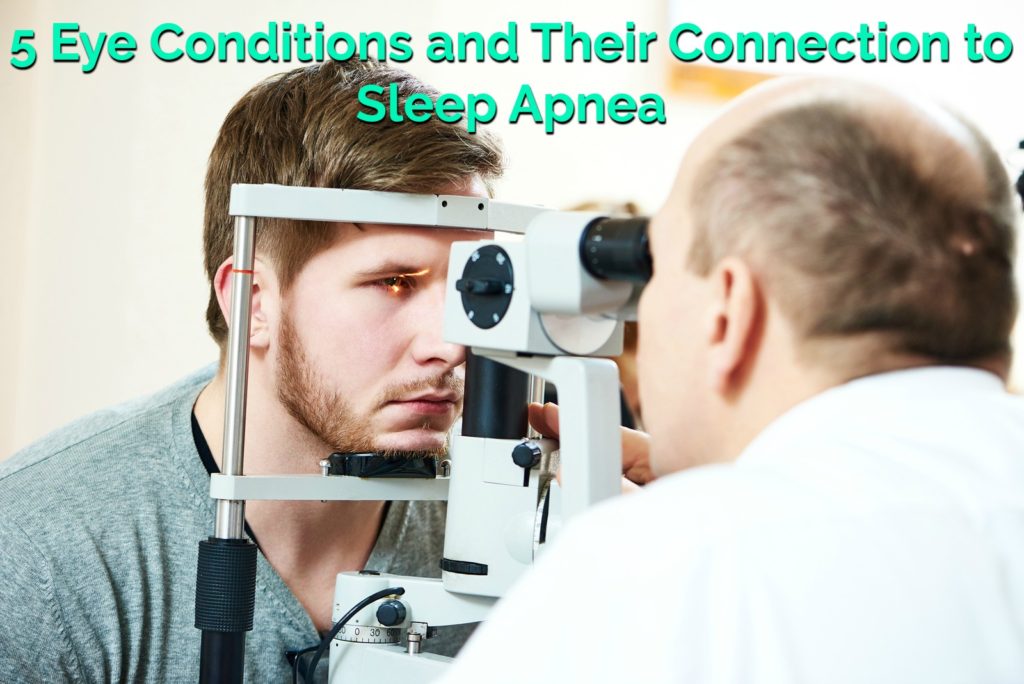 OSA is a potentially dangerous health disorder in which the sufferers breathing stops periodically throughout the night. These breathing lapses can last upwards of 10 seconds and can happen multiple times a night.  Nearly 1 in 4 men and 1 in 10 women have sleep-disordered breathing. Most cases remain undiagnosed, so sleep specialists are reaching out to Ophthalmologists for help. According to Nancy M. Holekamp, MD, vitreoretinal surgeon and associate professor of clinical ophthalmology and visual sciences at Washington University in St. Louis, when it comes to diagnosing OSA, “ophthalmologists have a big role to play and can make a meaningful improvement in people’s lives.”

Deepak P. Grover, DO, a neuro-ophthalmologist practicing near Philadelphia, suggests patients who have other OSA traits or symptoms, might also present with any of the following five ocular conditions:

Often under-diagnosed, Floppy Eyelid Syndrome (FES), is an eye condition in which the patient has a particularly large and floppy upper eyelid that can be turned inward or outward easily. Roughly 96 percent of patients that have FES also have OSA, and around 16 percent of OSA patients also have FES. A common factor between the two illnesses is obesity. Patients with FES will often complain of eye irritation, redness, and discharge. Some may experience their eyelids “flipping over” spontaneously.

Glaucoma is the leading cause of blindness in people over the age of 60 and it affects around 60 million people worldwide. It is a disease that damages the optic nerve of the eye. It usually starts with a build-up of fluid in the front part of the eye. As the build-up increases the pressure it causes damages the optic nerve. Blindness from glaucoma can be prevented with early detection and treatment.

Nonarteritic Anterior Ischemic Optic Neuropathy (NAION) refers to blood flow loss in the optic nerve of the eye. NAION is a painless condition that usually results in the loss of vision in one eye. It is the most common acute optic neuropathy condition in patients over the age of 50. Dr. Grover claims that, based on several large studies, 70 to 80 percent of patients with NAION have been found to have OSA. Recent research has suggested that patients with NAION should schedule a polysomnogram test to rule out the potential of also having OSA. The research also suggests that if a patient with severe OSA does not correctly comply with their CPAP treatment they increase their risk of second eye NAION vision loss or complete blindness.

Papilledema, also known as optic disc swelling, can be very dangerous and can cause blindness. It is linked to idiopathic intracranial hypertension (spontaneous pressure around the brain) and is possibly linked to increased blood flow. Symptoms of papilledema include headaches, nausea, vomiting, and graying or blurring of vision. The AAO states that the increase in CO2 concentrations that can result from interrupted breathing -such as that with OSA- may dilate blood vessels and increase pressure, leading to optic disc swelling. Patients who have OSA have higher occurrences of papilledema. However, it has been noted that CPAP therapy has proven to improve or possibly even resolve the issue.

Retinal Vein Occlusion (RVO) is one of the most common causes of vision loss worldwide, falling only behind diabetic retinopathy. It is a common vascular disorder of the retina. It occurs when there is a blockage in a vein that supplies blood and oxygen to the retina. For most patients, it is a sudden and painless change or loss in vision of the affected eye. There have been studies that show OSA is often an accompanying condition in patients with RVO, and could possibly even be a triggering factor. It is this association that is thought to be why many patients notice visual loss upon waking up.

To detect any possible eye disorders and to prevent vision loss, regular eye examinations with an ophthalmologist are extremely important. If you are worried about the possible connection between your eye problems and sleep disorders, discuss your concerns at your next eye exam. Your ophthalmologist can check for any ocular signs of sleep apnea. If they find a connection, you can then call Valley Sleep Center to schedule a consultation at one of our five convenient Valley locations.