Most people drift through predictable cycles of sleep, going from wakefulness to non-REM sleep to dream-filled rapid-eye-movement (REM) sleep. For people who suffer from a sleep disorder, the boundaries of these cycles become blurred, and in some cases, sleep can become a daunting experience rather than a time of rest and enrichment. 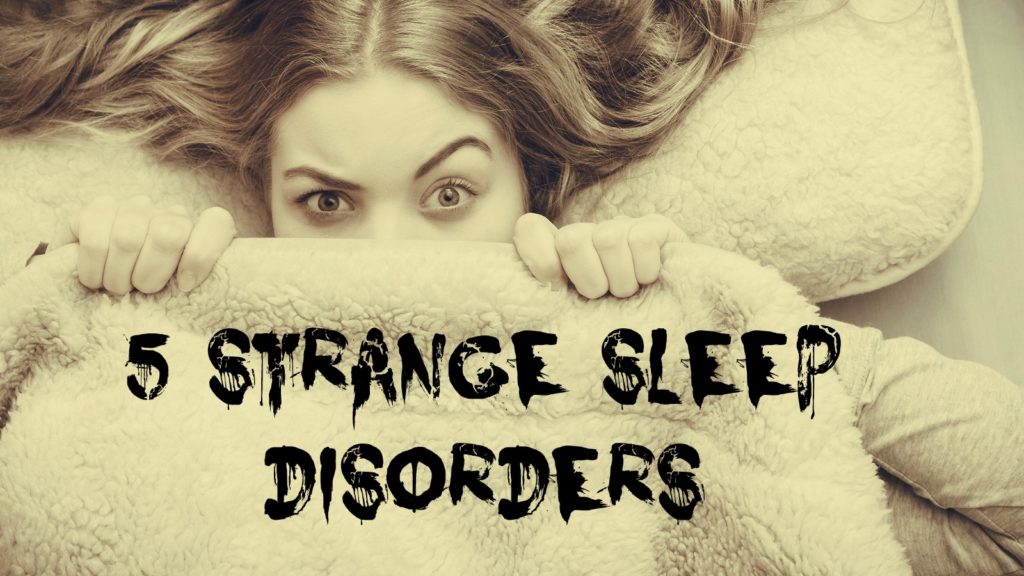 According to the Stanford Center for Sleep Sciences and Medicine, there are over 100 different types of sleep disorders with varying symptoms and effects on sleep, daytime alertness, and overall health. Some of these disorders are common and easily treated, and others are downright strange.

For people who suffer from these five strange sleep disorders, sleep may become more of dreaded ordeal than a time of peace and relaxation.

Though not as extreme as it sounds, exploding head syndrome is still fairly unpleasant for people who suffer from it. The disorder is most common in older people, but it has been known to affect children under the age of 10. Sufferers imagine hearing a loud noise just before falling asleep- like cymbals crashing or a bomb going off inside their heads. Some sufferers have said that they thought they were having a stroke. There is no pain involved, and sufferers aren’t in any danger.  Doctors are still unsure what causes it, but they do know that it isn’t related to any serious illnesses.

The very rare sleep disorder, fatal familial insomnia (FFI), is caused by a genetic mutation which occurs in only a few dozen families in the world. According to the American Sleep Association, FFI has no known cure and involves progressively worsening insomnia, which leads to hallucinations, delirium, and confused states like that of dementia. Eventually the sufferer falls into a coma and passes away. The average survival span for patients diagnosed with FFI after the onset of symptoms is 18 months.

Everyone dreams, and for most people it is strictly a mental activity. However, when someone suffers from REM sleep behavior disorder (RBD), they act out their dreams. According to the Sleep Foundation, RBD sufferers will physically move limbs or even get up and engage in activities associated with waking. They go on to state that some RBD patients engage in sleep talking, shouting, screaming, sleep walking, and even hitting or punching. Some even fly out of bed while still sleeping. Occasionally RBD can cause the sleeper to become violent. It all depends on the dream. It is usually first diagnosed when it causes danger to the person sleeping, their bed partner, or those they may encounter during an episode. Fortunately, RBD can be successfully treated.

Keep in contact with a doctor if you are diagnosed with RBD. Studies have found associations between RBD and other neurodegenerative diseases related to Parkinson’s Disease (PD). “We don’t know why RBD and PD are linked,” says Dr. Mahowald, “but there is an obvious relationship, as about 40% of individuals who present with RBD without any signs or symptoms of PD will eventually go on to develop PD.”

Kleine-Levin Syndrome (KLS), often referred to as Sleeping Beauty Syndrome, is a complex and rare neurological disorder that leads to excessive amounts of sleep (around 20 hours a day), altered behavior, and a reduced understanding of the world. According to the KLS Foundation, the disorder primarily strikes adolescents, but can occur in adults and younger children. In the beginning of an episode, the patient will become progressively tired and will sleep for most of the day and night. This is a trait known as hypersomnolence. Often the patient will only wake to eat or go to the bathroom. These episodes can last days, weeks, and even months. During this time all normal activity stops, patients are unable to care for themselves or attend work or school. In an episode, most KLS patients are bedridden, tired and uncommunicative even when they are awake. In between episodes, KLS sufferers appear to be perfectly normal and in perfect health.

Other symptoms of KLS include:

Patients with this sleep disorder live daily life with the reality that at any moment they may enter another episode. KLS episodes can last 10 or more years. It takes an average of four years for KLS to be properly diagnosed. The cause of KLS is still unknown, and treatment is currently unavailable.

The feeling of being conscious yet unable to move is called sleep paralysis. According to WebMD, sleep paralysis occurs when a person passes between stages of wakefulness and sleep. During these transitions, they may be unable to move or speak for a few seconds up to a few minutes. Some people may also feel pressure or a sense of choking. When it occurs, you can still breathe normally, and you are fully aware of what is happening. Sleepeducation.org states that some people also hallucinate during an episode. They may see, hear or feel things that are not there. They may even think that another person is in the room with them. The condition affects anywhere from 5 to 40 percent of Americans and occurs most often in teenagers. Sleep paralysis occurs when a person is about to fall asleep, or when they are waking up. It strikes most often when sleeping on the back.

Sleep paralysis could also be related to other things such as:

Sleep paralysis is fairly common, and not considered dangerous. If you suffer from sleep paralysis, you should see a sleep specialist if the episodes are keeping you up at night or making you tired throughout the day.

Though these are typically rare, and fairly extreme, there are many kinds of sleep disorders that someone may suffer from. If you find that you often have trouble sleeping for periods of several months or more, then you may be suffering from a sleep disorder. Most sleep disorders are easily managed with treatment, therapy, and medication once they are diagnosed.  Consulting a sleep expert and undergoing a sleep study can help you get to the root of your problem and get you back to sleeping restfully at night.