Does My Child Have Sleep Apnea? 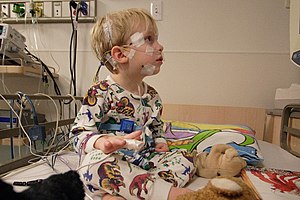 A pediatric patient prepared for a polysomnogram.  (Photo credit: Wikipedia)

If your child is snoring at night, there may be cause for concern.  Snoring, which is one of the most common signs of sleep apnea in both children and adults, is not something that you should just ignore in the hopes that it goes away.  It may indicate that your child is one of the estimated 1-4% of children in this country who have this sleep disorder and it is very likely that they will not grow out of it as they grow up.  In fact, diagnosing and treating sleep apnea in children can have a very real impact on every aspect of their lives, now and in the future.  If you think your child may be struggling with sleep apnea, watch for these signs and symptoms and make an appointment with their pediatrician to discuss your concerns.

Sleep apnea in children can cause similar symptoms to those experienced by adults including:

Children with sleep apnea may struggle in school because of behavioral problems, excessive daytime sleepiness, and difficulty paying attention.  Sleep apnea can also contribute to obesity and hormonal and metabolic problems.  As the condition is unlikely to disappear as they grow older, as adults, these children will be at a higher risk for cardiovascular diseases, diabetes, obesity, and pre-mature death.

If you suspect your child is struggling with a sleep disorder like sleep apnea, start by discussing your concerns with their pediatrician.  If a referral is needed, Valley Sleep Center has certified sleep physicians who specialize in treating sleep disorders and disturbances in children.  Diagnosis of sleep disorders in children is done the same way it is with adults, using a sleep study or polysomnography.  This generally involves spending the night at a sleep lab where various data including vital signs and brain activity can be monitored and analyzed.  Unfortunately, unlike adults, there is not enough information available on the viability of conducting sleep testing at home so all testing for children is done in a sleep lab.

The most common treatment for children with obstructive sleep apnea that is severe enough to require treatment is surgery to remove their adenoids and tonsils.  In 70-90% of cases, this surgery eliminates all symptoms.  In those cases where symptoms remain after the surgery, CPAP machines (continuous positive air pressure) similar to those used by adults can be used to alleviate the remaining symptoms.

The impacts of living with undiagnosed and untreated sleep apnea can be serious, significant, and long lasting.  If you think your child has sleep apnea, don’t wait to get them the help they need to get a good night sleep.