Sleep by the Numbers

Do you wake up, look in the mirror, and are reminded by the “bags” under your eyes that you’ve hardly slept a wink? What’s worse, now you feel that cold coming on too!

What if you could find cure-all that could prevent weight gain, prevent cancer, enhance athletic performance, ward off colds and improve your memory? Well, that “miracle” cure is… sleep! Only 30 percent of the entire population takes full advantage of this wonderful remedy. It’s been noted that nearly 60 percent of the population gets fewer than the seven to eight hours of sleep that experts say is necessary our bodies to perform at optimal levels. Worse yet, many individuals don’t even log six hours of sleep a night. 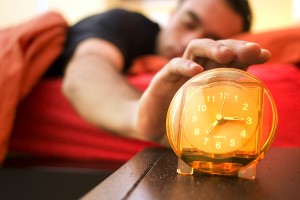 When it comes to sleep, getting enough is no different than eating a healthy diet or getting enough exercise. Everyone knows that if you eat more than 10 percent more calories a day you can add 15 pounds in a year, but did you know that sleeping 10 percent less carries with it the risk for weight gain? Women who sleep less than five hours a night are more than one third likely to gain 33 pounds over a 15 year period compared to those who get at least seven hours of sleep, according to the American Journal of Epidemiology reports.

To obtain a true good night’s sleep, your body needs to cycle through the five stages of sleep at least four times a night. The first four stages of sleep are crucial to maintaining a healthy metabolism, learning and memory. The fifth stage of sleep is REM and this cycle is important for regulating mood and enhancing memory. If you miss even two cycles in these stages your immune system becomes compromised, brain function and heart health suffer as well.

Remember, though you can have too much of a good thing! Eight hours of sleep is optimal, anything over that disrupts blood sugar levels, making type 2 diabetes a concern, according to findings in the journal Diabetes Care. Sleeping nine hours or more a night is linked to increased risks of dying to any cause, researchers at the University of California at San Diego have found.

If you’re logging less than seven hours of sleep a night you raise your likelihood of catching a cold by three times because sleep helps regulate your body’s response to fighting off infection. At the less than seven hours a night, you’re also looking at weight gain worries. Our bodies produce more of the appetite-promoting hormone ghrelin and less of the satiety-producing hormone leptin when we’re low on sleep.

We’ve all likely heard friends and family brag that they routinely get six hours of sleep a night and they’re “just fine,” right? Wrong. After a period of two weeks of getting less than six hours of sleep a night, your memory will be impaired as will your reaction times and general cognition. Researchers liken this sleep pattern to staying awake for 48 hours straight in relation to how its long term effects manifest themselves.

Sleeping less than five hours a night? Your body is now unable to regulate blood sugar levels and this could double your risk for type 2 diabetes, according to Diabetes Care. And people who sleep five or fewer hours a night are 50 percent more likely to develop high blood pressure than are those who get more than six, possibly due to their elevated levels of the stress hormone cortisol, which strain the heart, the journal Sleep reports

True, there are likely to be times when, because of outside stressors in your life, you just can’t get your usual eight hours of sleep and that is probably nothing to worry about. But, if you find lack of sleep, insomnia and daytime drowsiness to be a factor, it might be time to check with a doctor or a sleep professional to see if you have developed a sleep disorder.